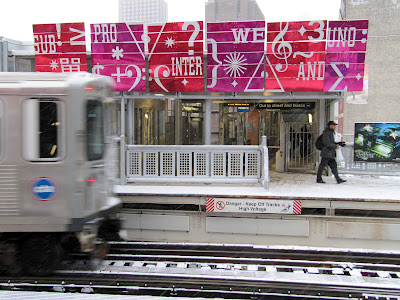 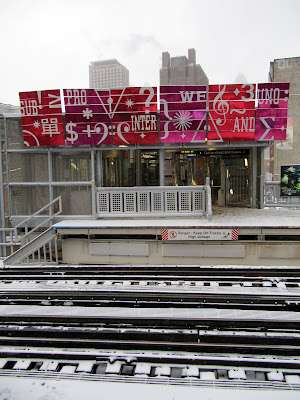 On a recent wintery day, leaving the Brown Line at Chicago Avenue, I was greeted by the sight at left (view of the east platform).  My first reaction was that I was looking at a remarkably colorful and dynamic advertisement.  Then I thought it had something to do with Christmas or the upcoming Chinese new year, due to the vibrant red and image on the left panel, which reads like half of an inverted double-happiness character (see middle photo).

I realized it was an art installation.  By BJ Krivanek, Reflections>Expressions is part of a cooperative effort between the city of Chicago and the Chicago Transit Authority to add art to stations (see http://www.chicago-l.org/stations/chicago.html and http://www.krivanek-breaux.com/index.html).  In addition to the commercial and Chinese associations, this installation refers to music (treble and bass clefs), math (plus and sum signs, for example), money, and language.  This last subject appears to be a (re)new(ed) theme in current art (see http://andrewvesselinovitch.blogspot.com/2010/11/todd-palmers-dna-art.html).
A most interesting element is the delta symbol, the two equilateral triangles that appear as parts of panels two and three (from the left) and four and five.  Delta is the mathematical symbol for change.  This installation supports the notion that change is part of, or comes from, interaction, both with each other and our environment.  The single deltas are literally formed of two panels, each of which, in turn, appears to be composed of six smaller panels.  The panels themselves appear to be made of sheet metal and move with the vibrations of the passing trains and, of course, the wind.  Kinetic and colorful, this installation lives one of its possible messages.
Unfortunately, or fortunately, when I wrote this post I knew nothing about this work.  Unfortunately, because I like to know the artist's (stated) intent and any back-story.  Fortunately, because I can rely on my eyes and knowledge.  Since I wrote it, Mr. Krivanek has provided me with a statement.  I was particularly amused by the following assumption, which would drive the fabrication of the piece:
Commissioned as part of the first system-wide renovation of the CTA Brown Line in exactly 100 years, this public art program is expected to survive a similar period of institutional neglect. Its design and fabrication is decidedly low-tech---mechanical pivot points that will never be lubricated, mirror-polished color-anodized surfaces that shed rain and will never be cleaned....
Posted by Andrew Vesselinovitch at 7:26 PM