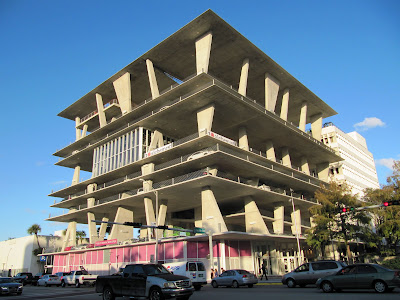 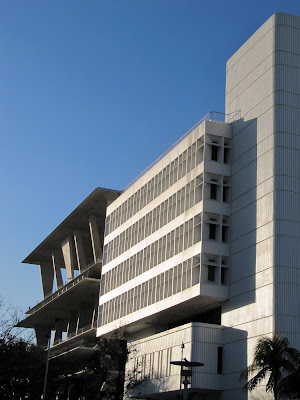 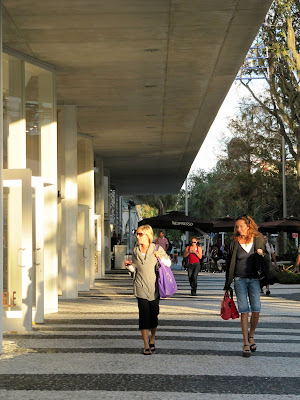 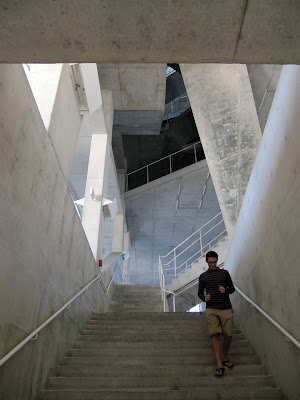 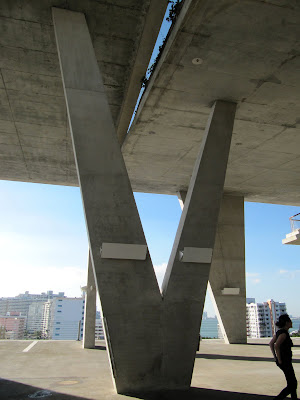 in is primarily, at least by square footage, a parking garage. In most instances, this would be a deadly addition to a commercial district. This building, completed this year, is astounding in many ways -- as a work of art, a destination, and as a sensitive part of the urban fabric.

The architectural office of Herzog & de Meuron designed this building as part of a larger project that includes the reuse of the adjacent mid-century modern SunTrust building (originally, Pioneer Bank, completed in 1971, with Ferendino, Grafton, and Pancoast as architects). The SunTrust has windows recessed behind vertically angled "brise soleil", concrete sun shades. This gives the building a very three-dimentional facade, especially for a modern building. It was my fear that the SunTrust would be demolished, given the general change in the area from office to residential and retail uses.

In beautiful contrast to my fear, 1111 is a very good companion to its neighbor (see second photo from the top). There is continuity and variation, which is what is often true in good design and needed in an existing urban fabric. The buildings are of about the same volume and material (concrete). However, whereas the SunTrust is white in finish and has uniform floor heights and fenestration, 1111 is made of "natural" (relatively unfinished) concrete and has widely varying floor heights and treatments.

1111 is also a good host to passers-by. The ground level has retail uses, yes, but also has a feature that is too-little used. There is a projection of significant depth above the first floor that protects pedestrians from the sun and rain (see third photo).

The overhang is one of the features that give 1111 a feeling. Superficially, one of the retailers is clothier Osklen and, probably because of its presence, Portuguese can be heard frequently on this block. More importantly, this block is the latest extension to the mall (also designed by Herzog & de Meuron, with Raymond Jungles), with pedra portuguesa in a stripped-down, black and white Brazilian pattern as pavement (again, see third photo).

Inside, the twists of the facade continue, literally and figuratively. The primary pedestrian entry into the garage leads to a set of stairs, which, in turn, leads upward in helter skelter fashion (see fourth photo). Each floor seems to be a different height, with a different type of ramp design for the cars to get from one to the next level. Then, on the fifth level, in the midst of parking, is a commercial use (note the glass "box" on the left-hand side of the top photo). A fellow visitor also told me there is a rumor of a house having been perched on the roof.

The seventh floor, the top level of parking, has perhaps the best stress-free view in Miami (there are many good views in the city that can be had by posing as a hotel guest or other desirable visitor, but I don't like the pressure). We can all pretend to be looking for our cars when we come upon views of the city, ocean, and bay (see last photo of the view of , with the and downtown in the distance). The roof is supported by a V-shaped column and there is a V-shaped gap in the ceiling, revealing sky. Could all these crotches and "V"s be saying something (see fifth photo)?

is a great addition to a city rich in architecture. Its beautiful and dramatic spaces have already been used for at least one photo shoot. The seventh floor is currently hosting Intersection Magazine's show for Art Basel Miami Beach. The show is, not 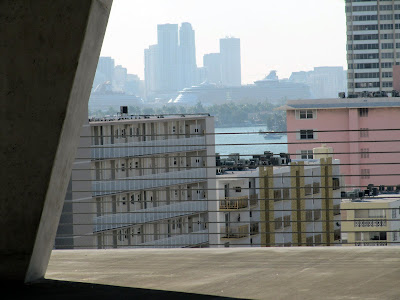 Posted by Andrew Vesselinovitch at 11:19 PM